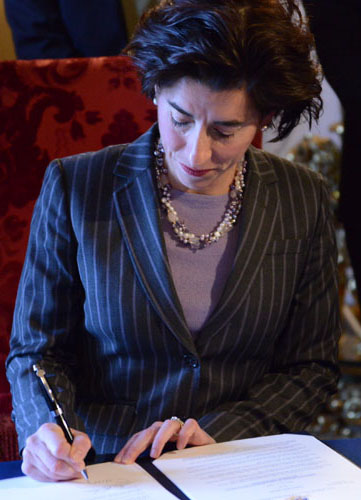 "The State should consider the creation of a permanent commission on property taxation to establish a system of universal, understandable and fair standards for the municipal taxation of property throughout the state."

. . . And like a good cog in the machine behind RhodeMap RI, Governor Raimondo is ALREADY complying.

They heard the citizens of Rhode Island rally against the profound attack on property rights which RhodeMap introduced into our state, and then placated opposition by dishonestly claiming the plan will "sit on the shelf."

Nothing could be further from the truth.

The charade continues while Rhode Island citizens work just to make ends meet in one of the worst economies in the country.

The politicians in Rhode Island are hoping no one will notice that a disastrous precedent is about to be set in our state, the creation of a statewide property tax.

Never in the history of the Ocean State has there ever been a statewide property tax. If Governor Raimondo has her way, that will soon change. And to top it off, it appears as if some people are "less equal than others" - those who have earned expensive homes and have the means to live South for the winter.

Apparently these citizens have fewer rights than everyone else.

Governor Raimondo and her handlers are moving forward with the destruction of RI and the principles upon which America was founded. They are doing everything to destroy government's respect and protection of individual rights.

Their weapon? RhodeMap RI implementation with its "comprehensive," social engineering, identity-based decision making, and schemes to take from and control the people of Rhode Island.Now is the time to fight back!

This is no route to prosperity or happiness. This is the route to intensifying corruption and destruction. This is the workings of a clandestine movement that wants to undermine America. Raimondo and her henchmen want to destroy freedom throughout our state, and hope the honest and hardworking people, who drive the state's economy and success, will not notice.

Send a resounding NO!!! NOT IN RHODE ISLAND - Tell these bureaucrats and their unelected state planners that citizens are

Volunteer here on the PRARI partner's website, The Gaspee Project

RELENTLESSLY CALL YOUR REPS and tell them you will not stand for this new discriminatory tax precedent.

Get your friends and family involved NOW before it is too late.