A Red Dye for Freedom

The RI Center for Freedom & Prosperity has published its 2019 Freedom Index, which grades all legislators in the General Assembly based on their votes during the session.  Overall, the picture isn't pretty.  Of the 95 bills scored on the index, the Center considered 66 to be a negative for freedom, with only 25 being positive, and the positive bills were mostly not as significant in their effect.  The most useful part of the index, however, is the scoring of individual legislators, which will help voters to make decisions when the next election comes around.

The online tool for the index has a couple of helpful maps that give a quick view of legislators' voting habits.  The map on the left is for House districts, and the map on the right is for Senate districts.  The darker the green, the better; the darker the red, the worse. 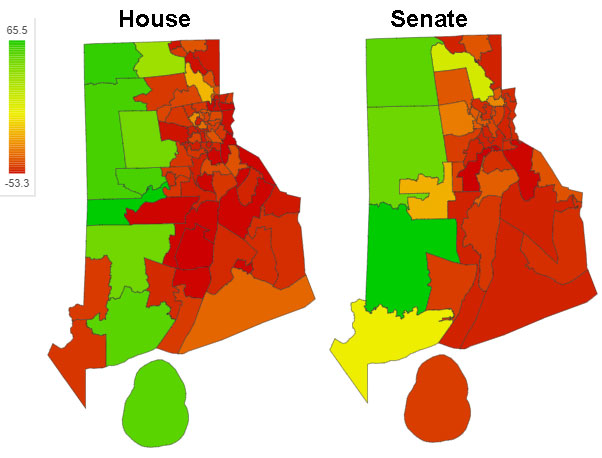 One notable detail on these maps, like a red-dye marker, is the red across two southwestern districts in the House: 37, held by Democrat Samuel Azzinaro, and 38, held by Democrat Brian Kennedy.  Whatever impression these two politicians may give their constituents when it's time to gather votes, they vote way out of step with Western Rhode Island.