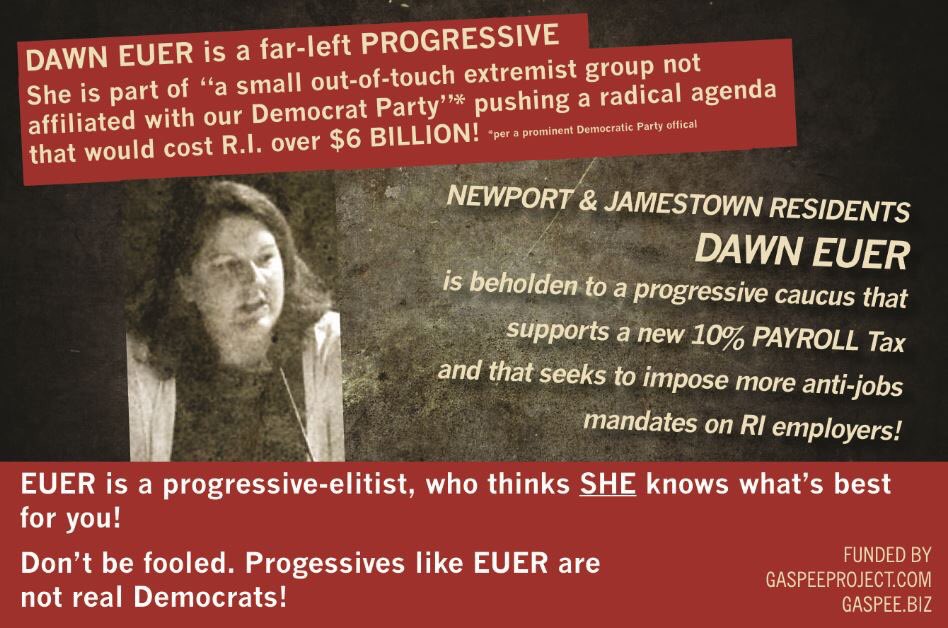 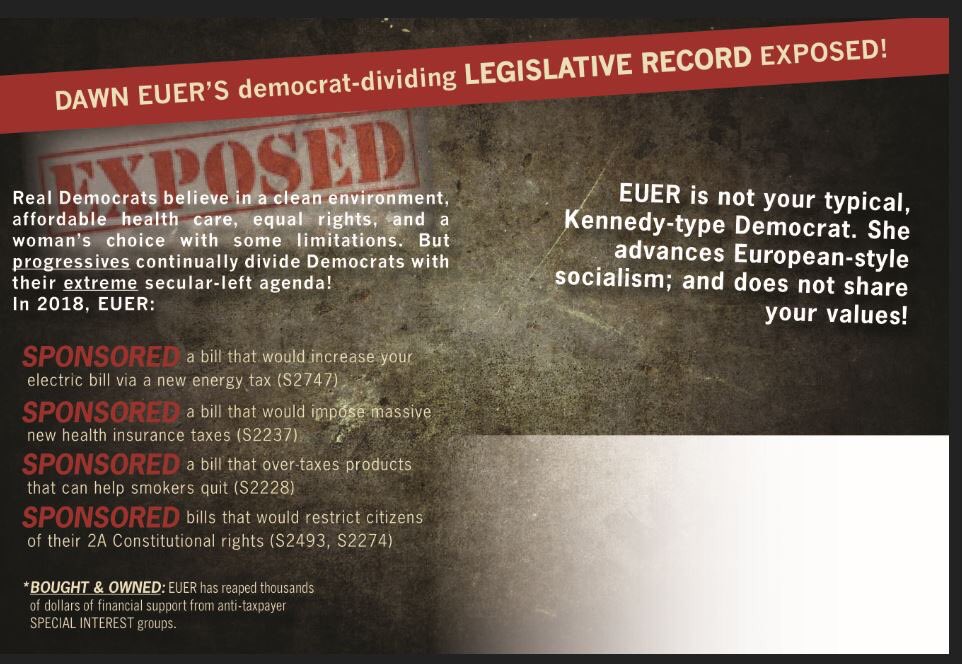 Elected in August, 2017 to Senate District 13 (Newport and Jamestown) in special election.

In her first year in office, Senator Euer allied herself against state taxpayers and residents and with a progressive caucus pushing a radical agenda that would cost RI over $6 Billion, a new 10% Payroll tax and that seeks to impose more anti-jobs mandates on RI employers.   She rated an unacceptable -21 (negative twenty one) on the Gaspee Project's 2018 Whipple Freedom Index.

Your Electric, Heating & Driving Costs are Not High Enough

... at least, that's what Senator Euer mistakenly believes with her vigorous efforts to increase the already high price that Rhode Islanders pay to heat their homes, turn on the lights and drive their cars by sponsoring bills:

> To place a new tax on heating oil, gasoline, propane and all petroleum products (S2188).
> To mandate onerous (S2508) and impossible (S2905) new regulations on the construction of new power plants; the effect would be to make the reliability of RI's power supply even more precarious and certainly raise electric rates even higher.
> To expand net metering which would raise electric rates (net metering is funded by ratepayer subsidies; S2380).
> To mandate an alarmingly comprehensive, intrusive and exhorbitently expensive initiative to pointlessly reduce the state's greenhouse gas emissions by 80% by 2050 (S2747).

During the 2018 legislative session, Senator Seveney sponsored S2237, a bill which would have implemented a radical, single-payer healthcare system.  Not only would single-payer healthcare severely restrict Rhode Islanders' medical choices and lead inevitably to medical rationing, a progressive (not conservative, not moderate) economist estimated the cost to implement in Rhode Island at $3.7 - $5.4 Billion: a completely unaffordable tab for our state's households and businesses.

> A bill to raise the meal and beverage tax yet again (S2856).
> Bills to repel higher income earners (S2072, S2075, S2389)
> A bill that would regulate and tax the sale of e-cigarettes.  S2228 would have the double negative effect of discouraging those who are trying to quit the dangerous habit of smoking cigarettes.

Senator Euer's legislative record clearly demonstrates that her allegiance lies almost exclusively with a progressive caucus pushing a radical agenda that would inexorably push ever more good jobs out of state and raise the already high cost-of-living here to the detriment of state residents.  She broke with her progressive principles in only one notable instance at the end of the 2018 session when she voted in favor of the millionaire and billionaire owners of the Pawtucket Red Sox (H7290).  At the State House, Senator Euer has advocated for a costly radical agenda and she stood up for for millionaires and billionaires.  The one group she did not represent is the only one that matters: the hard-working residents and taxpayers of her district and of Rhode Island.