CRANSTON RESIDENTS! Senator Hanna Gallo is really a Progressive-Elitist, not a real Democrat... don’t be fooled! Tens of thousands of our mailers are hitting across the state now.  Senator Gallo rated an unacceptable -23 (negative twenty three) on the Gaspee Project's 2018 Whipple Freedom Index. 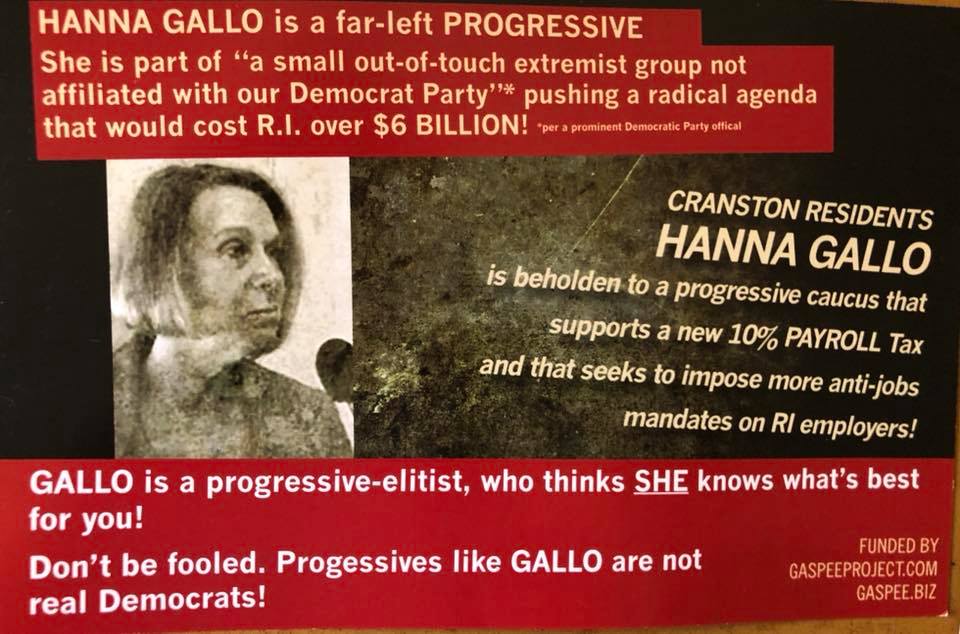 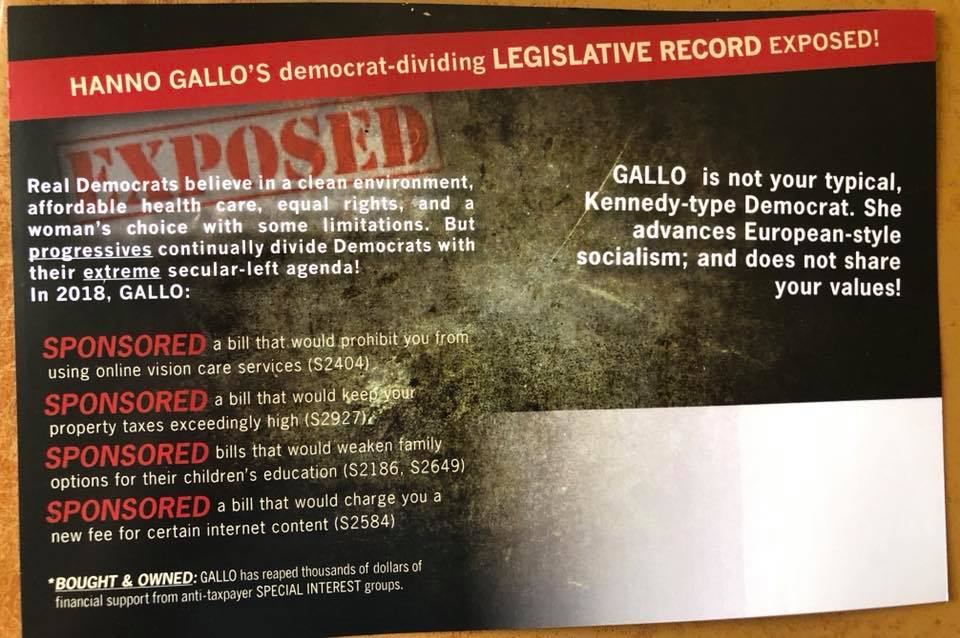 Senator Gallo has an extensive progressive legislative record, set out below, working against the best interests of her constituents and all Rhode Islanders.  It is worth noting up front that she actually received a negative award for one of the bad bills that she sponsored in 2018.  Her bill to hold internet pornography hostage for a fee (S2584) received a 2018 New England Muzzle Award.  This dubious award reflects poorly on her legislative temperament and also shed undesired negative publicity onto the state.

WalletHub rated Rhode Island's overall tax burden as fifth highest in the country.  But that was not enough for Senator Gallo, who worked vigorously to further jack Rhode Islander's high taxes via special interest bills, the high cost of which she was perfectly happy to pass along to the state's already over-burdened taxpayers.  Don't the residents of this district deserve to be represented by someone who doesn't have the luxury of being completely indifferent to high taxes due to employment in the public sector?

> Senator Gallo repeatedly tried to raise already high property taxes by sponsoring a bill to impose costly, rigid perpetual contracts for both teachers and municipal employees (S2927) in 2018 and voting for both costly perpetual contracts (H5593) and expanded public disability pensions (H5601/S0896) in 2017.
> She sponsored a bill that would have, amazingly, exempted certain state employees retroactively from the "landmark" pension reform and restored to them the extremely generous traditional pension that nearly broke the state (S2368, 2018).

Senator Gallo mistakenly believes, as progressives do, that she knows better than families what is best for their children in the area of education.  She worked to reduce families' options for their children wishing to excel via bills to burden and endanger charter schools (S2186) and mayoral academies (S2649).

In addition to being a big fan of higher taxes and reduced school choice, Senator Gallo firmly believes in the progressive tenet that she has the right to micromanage your life because you're not doing it right and Nanny Government Knows Best.

> She sponsored a bill that would require that the beverage choices for a Happy Meal (and similar children's meals) include certain healthy beverage options (S2739).

> She sponsored a bill that would effectively prohibit RI consumers from utilizing more convenient and less costly online eye care services, restricting access to emergent technologies - that's not a very "progressive" attitude in the original meaning of the word - and forcing patients to visit their eye care doctor's office in many circumstances where they don't have to. (S2404)

Remarkably, Senator Gallo voted "Yea" on the Pawsox bill (H7290), despite claiming to represent progressive values, thereby voting to funnel to the millionaire and billionaire owners of the Pawtucket Red Sox tax revenue and local taxpayer-backed bonds towards construction of a new baseball stadium.   With this vote, she displayed startling hypocrisy by breaking her own principles to stand firmly with millionaires and billionaires at the expense of her hard-working constituents and all Rhode Islanders.

P.S. Our friends at StopTollsRI.com asked us to remind you: "Trucks Today, Cars Tomorrow" - in 2016, Senator Gallo voted against all Rhode Islanders by voting for truck tolls - an unnecessary, highly damaging new revenue stream passed solely to benefit a certain insatiable special interest!