Lyle's Not-Good Way of Standing Out in the General Assembly

Scroll down the list of legislators in the RI Center for Freedom & Prosperity's 2019 RI Freedom Index, and Representative John "Jack" Lyle (District 46: Lincoln, Pawtucket) stands out, separated from his fellow Republicans by a number of Democrats who performed better on the index.  Lyle's particular hangup stands out, too.  As a retired teacher, now on his second career as a labor attorney, Jack is a union guy.

So, when it comes to picking a side between the interests of municipalities and taxpayers versus labor unions on things like evergreen contracts for teachers and other employees or an expensive reduced threshold for firefighter overtime, Lyle goes with the special interests.  On those pieces of legislation --- once again --- he stood apart from his fellow Republicans.

Lyle's professional bio might say more than intended: "As an attorney and educator, Mr. Lyle brings a unique perspective, understanding and intuitive advocacy in the fields of special education, student advocacy, labor disputes and other similarly related school issues."  So, for whom does Representative Lyle's intuition lead him to advocate?

A screenshot from his 2018 campaign video might give some indication: 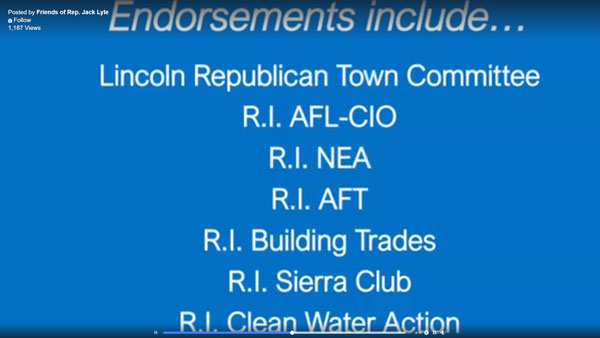 His campaign donors tell the same story.  Of the $14,210 Lyle has collected since he declared his candidacy in 2018, 58% came from PACs, and only 20% from individuals.  Lyle collected $6,975 in donations from labor union PACs alone.  Which way do you think they expected his "intuitive advocacy" to lean?

(Lyle also voted for extreme pro-abortion legislation, so it's not surprising to see a $500 donation from Planned Parenthood in his reports.)

In general, standing out is good and being independently minded is good.  When it comes to Jack Lyle, though, the question is: Good for whom?