WPRI political reporter Ted Nesi conveys the crowing of Rhode Island Democrat Governor Gina Raimondo upon the apparent win of Democrat gubernatorial candidate Andy Beshear over Republican incumbent Matt Bevin.  Raimondo is the chairwoman of the Democrat Governors Association, which is where Rhode Islanders are increasingly realizing her real attention and passion lie, rather than managing their state.

Democratic Gov. Gina Raimondo is celebrating her party’s razor-thin win in Tuesday’s election for Kentucky governor, arguing it shows the path to retaking the White House in 2020.

“It’s a huge victory, and a huge loss for President Trump,” Raimondo told WPRI 12 on Wednesday, describing herself as “ecstatic” over the result.

If Rhode Island's governor weren't more interested in her DGA role than in running her state, she might not be so "ecstatic."  After all, Matt Bevin is one of two governors keeping her from being the least-approved-of governor in the country.  (She's already the most disapproved.) 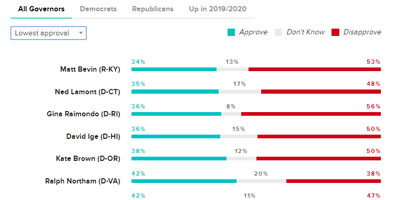 Notice something else about Nesi's article that ought to jump out for Rhode Islanders:

Raimondo was one of the players behind Kentucky Democrat Andy Beshear’s successful campaign due to her role as chair of the Democratic Governors Association, which plowed $5.5 million into the race on his behalf — much of it raised by Raimondo with the assistance of her DGA treasurer, former IGT Chairman Don Sweitzer.

How big a part of the "huge victory" in Kentucky is the rush to push through a 20-year, no-bid contract for IGT in Rhode Island?  This air of scandal probably won't help Raimondo improve her ratings in the Ocean State, but it doesn't seem that she really cares anymore.

As to whether the Democrats' bare success over the least-approved governor in the country reflects on Republican President Donald Trump, we'll have to wait and see.