After a great deal of fanfare and tension with the state party in early December, the Rhode Island Democratic Women's Caucus has been pretty quiet as the year turned over and the General Assembly's session got underway.  Its existence is worth remembering, however, to keep in mind the real purpose of identity-group politics.

A Providence Journal article about the group's meeting on December 10 gives the Caucus's chairwoman the microphone to explain their mission:

And what is "legislation that supports women"?

The message board asked participants to put dots next to the issues that they supported, and there you go.  A couple of dots and gun control, climate alarmism, and a socialist healthcare scheme are legislative issues that "support women." 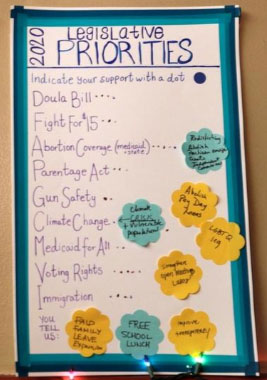 Notice that the only option the Women's Caucus gives to women is to express support or to stay silent.  Any Rhode Island women who don't feel especially supported by the notion of being forced to pay for other women to abort their children or of being forbidden from making their own agreements for pay from a job, well, apparently those women don't count.  Oh, you can put additional issues on your little flowers and tack them to the board (where they can be removed if they aren't right-thinking), but that initial list is there whether you like it or not.

That's the whole point of progressive identity politics.  You must stand with your group, and progressives will come along and tell you what you all must stand for.