Did you know that Representative Deborah Ruggiero co-sponsored the UNFAIR TO EMPLOYERS bill that would further worsen RI's already hostile business climate? This, in addition to other progressive bills that will raise your energy costs and insurance premiums.  Rep Ruggiero rated a dismal -33 (negative thirty three) on the Gaspee Project's 2018 Whipple Freedom Index. 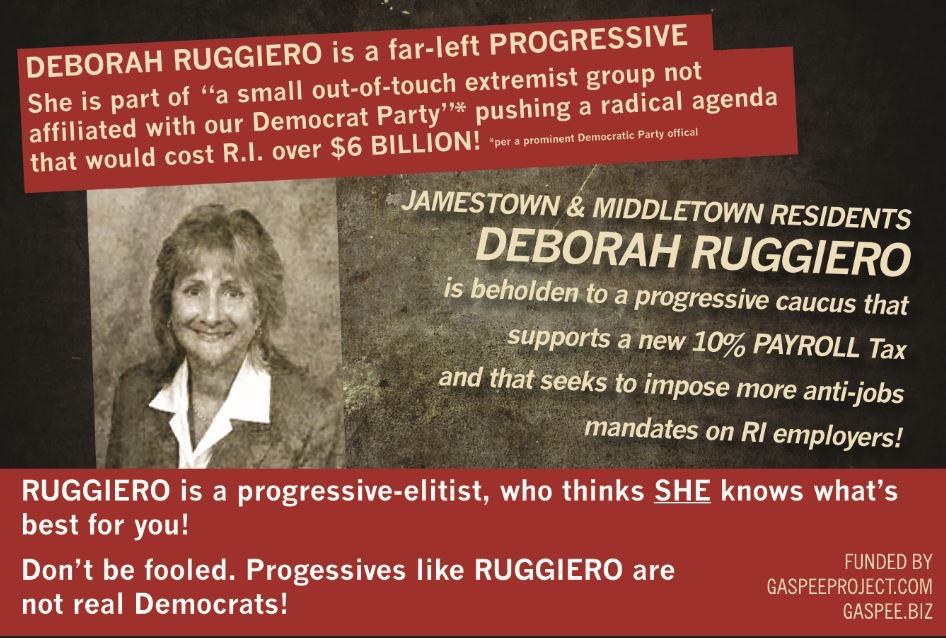 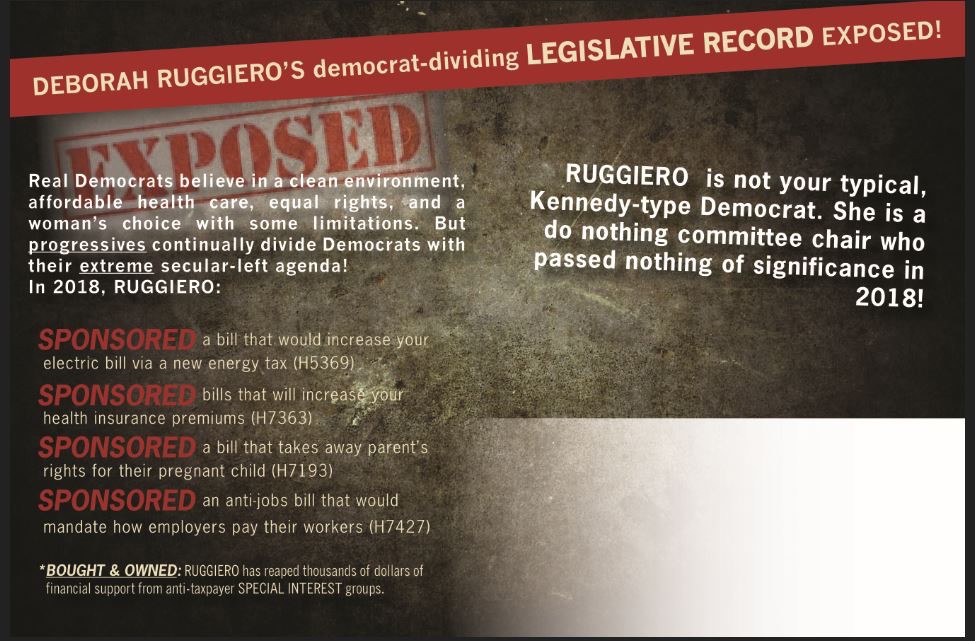 Most Rhode Islanders would say that their health insurance premiums are plenty high enough - and they would be right, according to GoBankingRates, which ranks RI's premiums in the top 25%.   But that's apparently not high enough for Rep Ruggiero who vigorously worked in 2018 to further raise Rhode Islanders' premiums (sponsorship of H7363, H7575).

...  that's clearly what Rep Ruggiero believes with her sponsorship of bills that would have increased the already high price that Rhode Islanders pay to heat their homes, turn on the lights and drive their cars via a new "climate change" tax (H7824, 2018), massive new regulations which would effectively kill the construction of all new power plants and raise electric rates (H8120, 2018) and a ten year extension of the state's renewable energy program (H5274, 2017).  Rep Ruggiero actually brags on her official state webpage about these efforts to raise everyone's electric rates by compelling the use of exorbitantly expensive renewable energy.  The imposition of "green" energy on already overburdened ratepayers is a misguided priority of the progressive movement.  With these anti-ratepayer efforts, Rep Ruggiero confirmed that her real allegiance lies not with her constituents or Rhode Islanders but with a costly, unrealistic, very damaging political agenda - progressivism - straight from a world of make-believe.

On her website, Rep Ruggiero claims to be a "small business advocate".  But at the General Assembly, she sponsored and voted for numerous bills to further exacerbate RI's already hostile business climate:

> Bill to change current law - "equal pay for equal work" - to the vague, completely subjective standard of "equal pay for comparable work under similar working conditions".  Would have become a significant new burden on RI businesses as both compliance and new fronts for dubious litigation.  (H7427)

> Bill to extend the timeframe for an employer to be sued for an unlawful employment practice from one year to two years.  (H8276)

Rep Ruggiero would undoubtedly claim that she stands with taxpayers and Rhode Island's middle class.  Remarkably, however, she voted to funnel to the millionaire and billionaire owners of the Pawtucket Red Sox tax revenue and local taxpayer-backed bonds towards construction of a new baseball stadium (H7290A).  With this vote, she stood firmly with millionaires and billionaires at the expense of hard-working taxpayers including.

On her website, Rep Ruggiero claims to "work for you, advocating on issues important to our district".  Yet her legislative record vividly demonstrates that she worked to achieve the opposite. The costly wish-list of an out-of-touch progressive caucus; the costly whim of millionaire and billionaire owners of a baseball team - she worked for everyone except the only people who matter: the hard-working residents and taxpayers of her district and of Rhode Island.

P.S. Our friends at StopTollsRI.com asked us to remind you: "Trucks Today, Cars Tomorrow" - in 2016, Rep Ruggiero voted against all Rhode Islanders by voting for truck tolls - an unnecessary, highly damaging new revenue stream passed solely to benefit a certain insatiable special interest!