WARWICK RESIDENTS! Evan Shanley is really a Progressive-Elitist, not a real Democrat... don’t be fooled! Tens of thousands of our mailers are hitting across the state now. 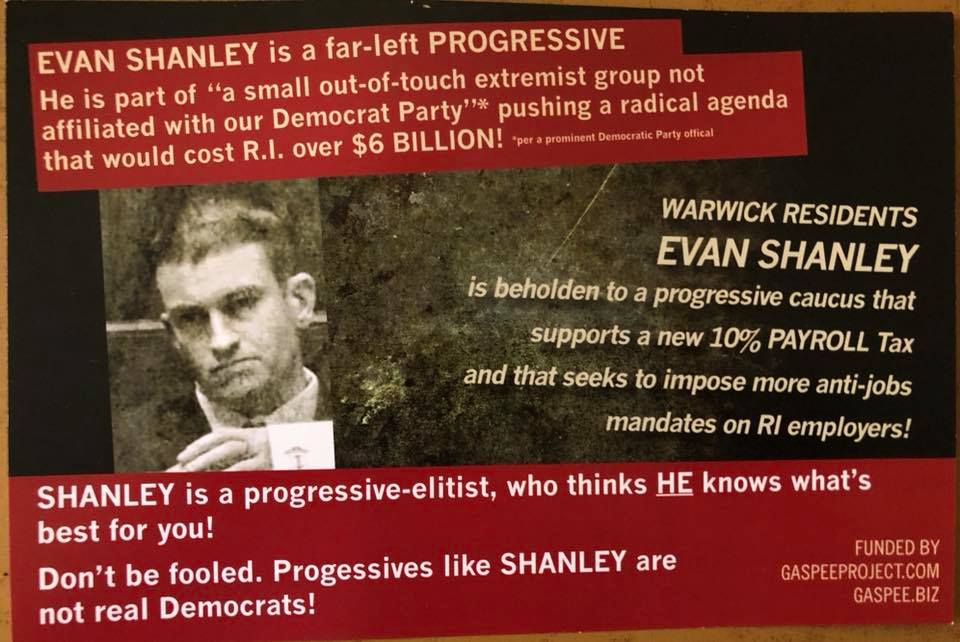 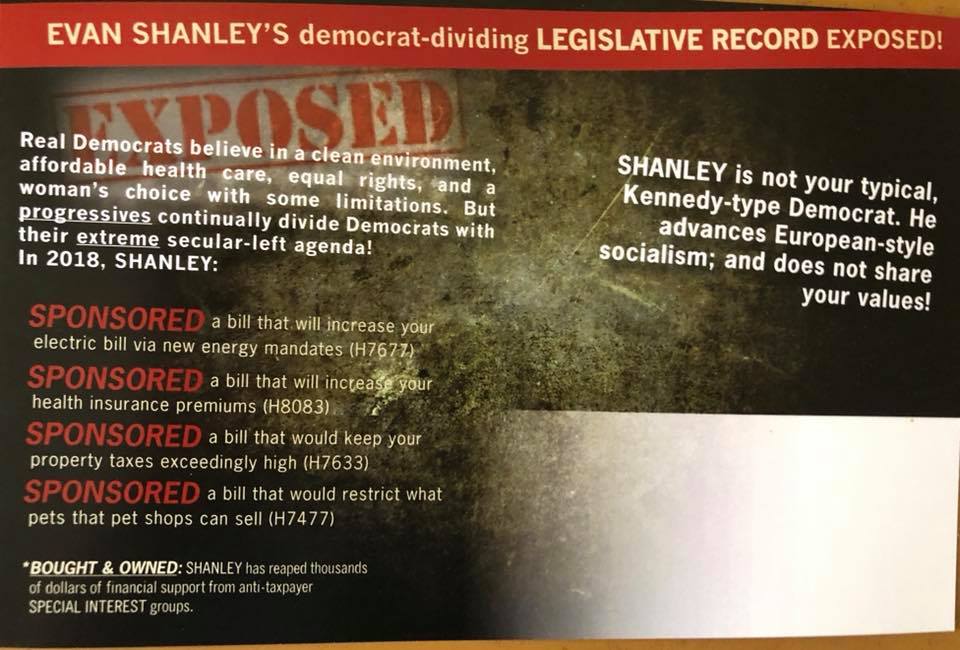 As a candidate and a sitting legislator, Rep Shanley has said all kinds of nice things about the need to make Rhode Island a more business-friendly place.  For example, he told GoLocalProv in November of 2016: "We’ll never attract new business or retain the ones we have by throwing money at the problem. Instead, we need to find ways to support the companies that have already chosen Rhode Island for its colleges and universities, environment, and culture by streamlining regulations, cutting taxes on small business, and targeting infrastructure improvements in ways that make doing business here profitable."

Yet he spent his first term in office working to achieve the exact opposite, pushing a radical, progressive agenda that would cost RI over $6 Billion.  Rep Shanley has obviously made himself beholden to a progressive caucus that supports a new 10% Payroll tax and that seeks to impose more anti-jobs mandates on RI employers.   In 2017, he voted for H5413 which created yet another burden on businesses in the form of mandated paid leave.  He also worked to exacerbate RI's bad business climate in 2018 by putting forward his own anti-job, anti-employer bills (H7477 & H7111), not to mention an array of bills (read on) that would jack the already high electric rates that Rhode Island businesses pay.

Not high enough, according to Rep Shanley, who vigorously worked to increase the already high price that Rhode Islanders pay to heat their homes, turn on the lights and drive their cars:

> Put forward his own bills that would raise the already high electric rates that all Rhode Islander residents and businesses pay: H7677 & H7774. The latter, H7774, would require the electric company to bury power lines in the event that a residential power outage lasts more than four days - an exorbitantly expensive proposition that would be funded entirely by already heavily burdened rate-payers, not the electric company as the rep wants to pretend.

> Voted in 2018 for H8120 - massive new regulations for any new power generating plants which would effectively kill the construction of all new power plants, making the reliability of RI's power supply even more precarious and certainly raising electric rates.

So says Rep Shanley with his action in sponsoring bills in 2018 to give perpetual contracts to firefighters (H7633) and police (H7634) - measures that would certainly have raised Rhode Islander's already high property taxes.  And he did his best also in 2017 to raise your property taxes by voting for bills H5593 (perpetual contracts) and H5601 (expanded disability pensions).


But perhaps the crowning anti-taxpayer, hypocritical act by Rep Shanley during the 2018 legislative session was his vote in favor of the millionaire and billionaire owners of the PawSox (H7290).  Let's now recall another statement he made to GoLocalProv in Nov, 2016: " ... politicians have been too quick to chase pie-in-the-sky solutions, like the 38 Studios mess."  We agree, Rep Shanley!  Now look in the mirror; you are squarely in their ranks.  And the millionaires and billionaires thank you for standing with them and against the taxpayers of Pawtucket and, ultimately, Rhode Island.